It’s a bit crazy how much brands pay to have airtime during the Superbowl. It’s become a place of big players. And now, it’s not only about getting the ad up there, it’s about being the best ad up there.

So yeah, you’ve got to have a lot of cash to waste on media buy, as well as probably a whole team and a whole bunch of other cash for production. Costs are up around 11% this year, to roughly $5m per 30s spot. Yes, you read that right – five million dollars for 30 seconds. In other words $166,666 per second. And that is literally just to show the advert. That doesn’t include any production or planning costs. As fun as they are to watch, I actually prefer more subtle and clever ways of engaging in this space that consumers have welcomed as an advertising hot spot (cue reference to the epic reaction of Oreo to the Beyonce blackout).

However, despite my reservations about the ROI on this, it undeniably draws an enormous audience, both live and for a few weeks after whilst the best is debated. Particularly in markets where the Superbowl itself is mostly irrelevant (sorry America), the ads still have some pull for consumers.

“No amount of homepage takeovers, no amount of native content, no amount of posting would bring you the reach and the impact that a Super Bowl ad would.” – SoFi COO Joanne Bradford.

First things first, American TV is basically 75% adverts. Therefore, I could not possibly fit all of them in one post. Someone else could be bothered though (probably because they were getting paid to do it) and you can find that here.

I’m in two minds about this one. On one hand, I feel like its a bit weird giving an old man who needs a nurse/carer the keys to one of the fastest cars on the road. On the other hand I like the concept about the car bringing anyone to life. And obviously the backing of Bowie is a nice touch (I wonder if that was a last minute decision or, well I don’t want to say luck but….). There’s the undertone of ‘Murica which is essential in all Superbowl ads. If it were me, I would have the line “Chasing the moon brings out the best of us” instead of “Choosing the moon..” but I’m not an agency creative.

Okay let’s ignore how Americans pronounce Hyundai as ‘hun-day’. I really like this one. You don’t see car adverts aimed at exclusively women very often but I think they’ve made it work. It reminds me of this diet coke advert. Plus – Ryan Reynolds. This advert is actually one of two – the other staring Kevin Hart.

Love this advert. It’s the second time they have advertised in the Superbowl. It’s comedic, light-hearted and current. I think this is going to be one of the winners this year.

How much ‘Murica can you get in an advert? Not much more than Budlight have managed to pack into theirs. But it’s the good, kind of making fun of themselves but kind of not, type. Not the Donald Trump type. Star-studded. Good, but also almost forgettable (particualrly to the international audience, which isn’t really their audience so we’ll forgive them).

Budweiser, Bud Lights’s older brother, have gone for the opposite approach. Featuring a British actress (Helen, obv) warns against drink driving – which is actually a big problem in America. Good use of airtime from them, but could be more attention grabbing to get their message over.

Who can resist a teeny tiny baby sausage dog? Not me. Simple ad, simple idea. Now give me a puppy.

SO CREEPY. But also strangely effective….

I really like Taco Bell’s marketing. They were one of the first to adopt Snapchat, and their Twitter was on point before Innocent knew what Twitter was. This is another well thought-out campaign. A little while ago they released a heavily edited announcement that they were doing a Superbowl advert this year. Since then they have released sneak peaks of their advert, but NO ONE knows what they are promoting yet. They are also giving people the opportunity to pre-order the mystery item to receive it before anyone else. Yep, they want you to buy something when you don’t even know what it is. Good work from them. I imagine they have a lot of social planned too. 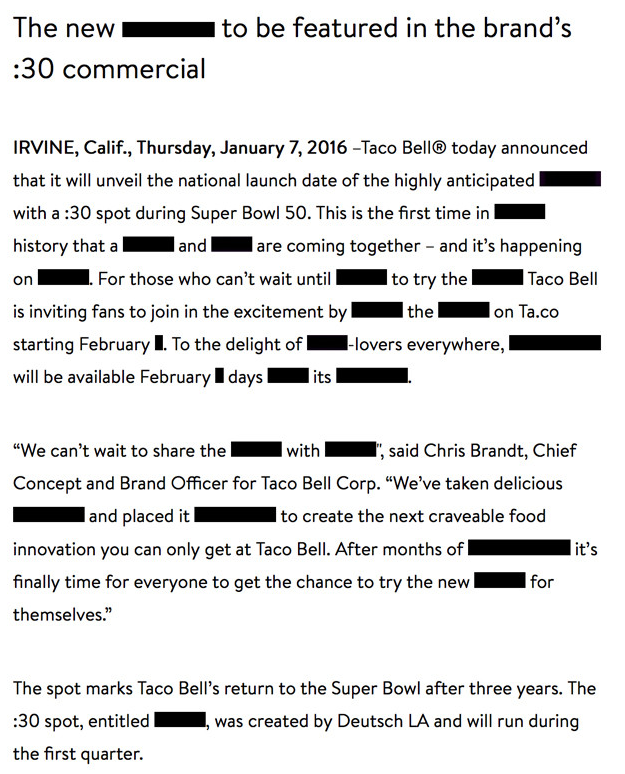 Following on from last year, Intuit is giving up it’s paid for spot to a small business again. This year’s winner is the above. The ad itself is eye-catching, starting as if it was a movie trailer. For Intuit the idea is a good one, showing how it supports small businesses in a real way, rather than just talking about it in an advert. Bold move considering how much spots go for but amazing opportunity for DWCC.

Promoting their new Amazon Echo, they have released ads starring Alec Baldwin who is throwing #BaldwinBowl. This advert came first, followed by the above. I think the above is better. It’s short, to the point and showcases the product in a obvious but not gauche manner.

In a weird twist of events, Axe have produced an advert encouraging men to embrace their imperfections – something mostly reserved for adverts towards women. But hey, it’s all about equality these days, so I’m liking it. I wonder how many Mom’s are going to go out and buy Axe for their sons to say “see! girls will like you for you”.

Big and bold from Superbowl first timer Paypal. Really liked this one. It almost plays like a mood film. I would say it definitely would get people to stop and think about using Paypal.

Hopping on one of the biggest 2015 meme’s is T-mobile. If I didn’t know any better, I would have said they took some cues from the Orange Wednesday adverts. Still think last year’s featuring Kim Kardashian was better, but this is still good.

On the digital and second screen side, Snapchat is going to be a big player this year. They have been amping up their live content, giving out news for the local area, and collecting global shareable stories that let people from across the world engage with big events. With Superbowl being one of the biggest, I’m expecting a lot of action from Snapchat itself as well as brands. The big question is, how much is it going to cost a brand to have a sponsored filter or story on game day?

If you want to re-watch last year’s ads, find them here.

If you want to watch some of the best from the past, you can take a look here.

Check out these great articles on Superbowl advertising: