Now that the festive season is over, all of the major brands will be frantically looking over agency reports telling them how well their millions were spent. Who came out on top? Who drove the footfall? Let’s find out.

I have to admit that being in the US has me a bit out of the loop in the general conversations surrounding the adverts, so bear with me and feel free to comment and disagree. If you want to re-watch any of the ads, find them on my blog post here.

The advert cost £1m to shoot and a further £6m was spent on in-store advertising and taking TV slots in advert-breaks (Telegraph, 2015). It was highly anticipated, and on the whole did not disappoint. Their philanthropy and awareness angle – taking a page out of Sainsbury’s 2014 book – was well received.

As a result, John Lewis recorded record retail sales for the festive season. Revenues were up in the department store around 6.9% from last year.

I thought their through-the-line was excellent. Their digital engagement was clearly thought-out and planned. Their app was good, well designed and functional (or so I’ve been told). 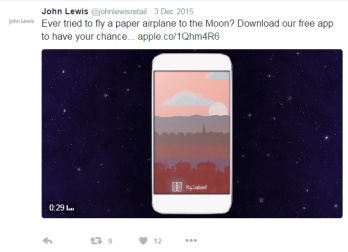 A new entry to the Christmas ad stakes this year was Warburtons. They didn’t start small however, and well all out with a singing and dancing collaboration with the Muppets. The Telegraph declared it to be the winner of 2015.

Awesome work from them. I wonder after this success they’ll do it again next year?

Sainsbury’s went in a completely different direction to last year’s controversial wartime advert, but with similar success. With a whopping 29m views they’ve out-done everyone else with their animation story. PR Week’s poll also saw it being voted viewer’s favourite advert.

“Sainsbury’s is expected to reveal a 0.7% fall in sales at established stores in the three months to the end of December” – The Guardian

Although this seems bad, it is actually the smallest growth decline out of the top four – so it’s kind of a win? In a declining market (around 2bn year on year), you’ve got to take the ones you can get. 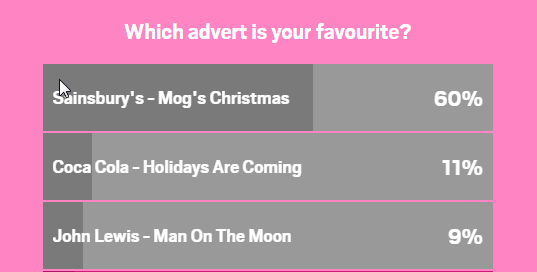 Overall, it seems that everyone loved it.

Whether it was their intention or not, Aldi made headlines with their second Christmas advert for 2015. They had a planned campaign, which did well but not spectacularly, however it was their mocking of John Lewis which launched them into the spotlight this year.

The internet went a bit crazy for it, and I have to say I loved it. They produced it with a rapid turnaround and hijacked the ad to convey a very brand appropriate message for themselves. It felt like an Aldi ad through and through, and they managed to get on the John Lewis hype.

The discounters have been winning the grocery wars for a while now, and this Christmas was no different.

The Lidl advert is one I really liked this year, and it looks like they’re starting to catch up with Aldi’s marketing success.

“Aldi and Lidl’s relentless growth continues apace. The only difference this year is that Lidl is now growing faster than Aldi” – The Guardian

House of Fraser has done pretty well this year. Although their 400k views pales in comparison to the supermarket giants, consumers voted that they enjoyed theirs the most of all the fashion retailers.

We did have some rogue entries from other countries though, including this Spanish lottery one with 5.1 million views on YouTube.